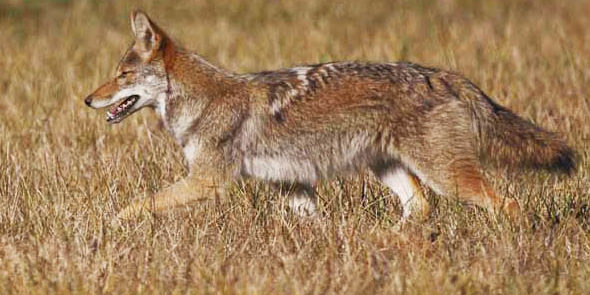 Sweat literally rolled down my face as I silently I pleaded with the scorching ball of fire to dip below the tree line. I needed relief from the June sun, but there wouldn’t be time or need for shade. Coyotes are getting lots of attention lately, and rightfully so. Studies show fawn survival rates are dropping, enough so that states are reducing deer-hunting opportunity. Now’s a great time to get after fawn-hunting coyotes.

I spotted movement in the high grass of the grown-up field edge not 15 yards from the fawn decoy and even closer to the speaker of my electronic predator caller.

My son’s youth-model .243 was already propped on a rest, so I simply leaned into the scope and pressed my shoulder against the rifle butt. Through the window of the box blind, the scope’s view danced across the back of the food plot and found the decoy. I eased the scope’s view toward the field edge where I’d seen the movement, and my sight picture filled with the head and front shoulders of a coyote emerging from the high grass, stepping slowly but purposefully toward the decoy. I squeezed the trigger, satisfied in knowing that one more fawn-hunting coyote was gone from our hunting property.

I’m not sure there’s a bad time to hunt coyotes, at least not on my place where we’ve seen a dramatic drop in fawn recruitment, not to mention much lower turkey populations. This time of year, however, taking out coyotes is especially effective. It’s harder to hunt and kill coyotes in the summer than other times of the year, but right now is when does are birthing fawns. Coyotes have found newborn fawns to be easy pickings, and they are picking off fawns at alarming rates, particularly in the southeast where I’m from. In these southern states, coyotes are not native. Perhaps that’s why coyotes are having such a big impact.

The summer months are the perfect time to hunt coyotes. Use a fawn-in-distress call, you’re taking coyotes that have learned to hunt and kill fawns. Biologists say other coyotes will eventually move in to fill available habitat if coyotes are taken out. But kill a coyote right now that is a fawn hunter, and you can directly improve fawn survival on that tract of land. Fawns will have a chance to get their legs under them before more coyotes move in, and that time will give them a better chance at surviving.

Coyote Calling On A Budget

A hunter need not spend a small fortune to successful call up coyotes on the hunting lease. First, choose your weapon. Your deer rifle will work fine, and that’s what I typically use for most of my coyote-calling setups when I expect to have shots of 100 yards or more. Another great option is the 12 gauge shotgun in your gun cabinet. However, I do recommend a simple and inexpensive modification—buy a specialized choke tube like the Predator Choke made by Trulock. A specialized choke tube will increase distance and the effectiveness of your pattern, so it delivers the greatest knockdown punch. Use No. 4 buckshot or No. 2 buckshot, not O or OO. I’ve found that more smaller pellets, especially when fired through a specialized choke tube, work much better than a dozen big buckshot pellets on coyotes that are often moving quickly. A decoy is a great tool for closing the deal when trying to call a coyote into range. The author likes a fawn decoy this time of year because he wants to target coyotes that are targeting fawns.

Next, you need to consider how you’re going to call coyotes. Electronic calls are awesome, and not all of them will cost you a mortgage payment. I use one that’s about $200 made by Flextone, the FLX500. It has a remote option, meaning I can place the speaker a good distance from my hiding spot or stand. Coyotes are slick, and they’ll come in locked on the location where they heard the calls.

There are other less expensive options. I have a hunting buddy who has called up coyotes using just his mouth by making a squeaking noise that I guess sounds like a mouse. There are mouth calls, as well, that imitate very well the bawls of a fawn in distress or a screaming rabbit that sounds like its foot got slammed in a car door.

Another inexpensive option is a simple phone app called iHunt, which comes preloaded with hundreds of animal calls, including dozens for coyote hunting. For less than $10, you can download the app to your smartphone, then using Bluetooth sync with a remote speaker. I haven’t tried it, but you could probably use it just from your phone without a speaker in some hunting situations.

Another tool in your coyote-hunting toolbox is a decoy. Again, it’s not necessary, but I like to use a decoy. During the summer, I typically use a fawn decoy because I want to kill coyotes that hunt fawns. Once a call gets a coyote’s attention, the decoy will often close the deal in bringing the animal into range. There are cheaper decoy options that also work well, including motion decoys that are basically vibrating and wiggling pieces of fur, but they fool hungry coyotes.

Think it’s too hot to spend an evening in a stand hunting this summer? Most people would say you’re right, but not me. Coyote is too exciting and too much fun. It doesn’t require lots of money, and taking out some coyotes, especially this time of year, will do you part in conserving fawns and other animals that all-to-often fall prey to a coyotes.