I learned to handload centerfire at the same time I learned to shoot. The deal was that if I wanted to shoot, I also needed to reload. Since then I’ve spent lots of time at the reloading bench. I always enjoyed it, but I don’t do it much anymore. Back then, if you wanted accurate ammo, you pretty much had to load it yourself. Back then, if you wanted particular bullets, anything beyond the “vanilla ice cream” bullets offered by major manufacturers, you had to load them yourself.

It remains true that, only through handloading, can you truly tailor ammunition specifically to your rifle… but factory ammunition has gotten so good that it’s no longer a given than I can load a more accurate cartridge than I can buy. And as far as choices, good grief, the choices today are almost endless.

We didn’t use to be quite so picky about our ammo. Although telescopic sights were used in the Civil War, they didn’t come into truly widespread use until after World War II. The rifle scope has nothing to do with a rifle’s accuracy, but it sure does make it easier to shoot accurately! Before scopes most hunters didn’t really know how accurate their rifles and ammunition were (or were not) and didn’t really care because effective range was limited by vision.

Bullets have also come a long way. The jacketed bullet was a parallel and enabling development to smokeless powder, which produced velocities too high for the lead and lead alloy projectiles used with blackpowder. Early expanding bullets were simple “cup and core” bullets: A drawn copper cup with a lead core. Expansion was promoted or retarded by the thickness of the jacket and the amount of lead exposed at the nose. Such bullets worked well then and work well now at moderate velocities, but may expand too quickly at extremely high (“magnum”) velocity. For years the only solution was to use heavier bullets, and to this day bullet weight covers a lot of sins in bullet design. But another answer was better bullets. John Nosler’s Partition, introduced in 1948, was the first of what we thought of as a “premium” hunting bullet. Others followed; Bill Steiger’s Bitterroot bullet, though always scarce and hoarded, was the first readily available bonded-core bullet.

For years, however, these and subsequent “special” bullets were the exclusive province of handloaders. Federal started the Great Hunting Ammo Race when they started loading Nosler Partitions, but hunting bullet development didn’t stop with the Partition. Other special bullets came along, including the Trophy Bonded Bearclaw, Swift A-Frame, and Barnes X. These bullets, too, were initially the exclusive province of handloaders… but not anymore. 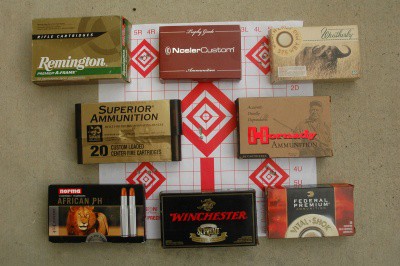 Federal long manufactured and loaded the Trophy Bonded Bearclaw under license, and more recently updated it to the “Trophy Bonded Tip” bullet. They also source and load Barnes bullets, and in larger calibers the Australian Woodleigh bullet has been a mainstay in both expanding bullets and solids. Remington is currently the primary source for loaded ammo with Swift Bullets, both the A-Frame and the newer “tipped and bonded” Scirocco. Winchester started working with Nosler more than a decade ago, creating a line of “Combined Technology” Winchester/Nosler bullets for their own Winchester Supreme line of upgraded ammo. Winchester ammo today features Nosler’s AccuBond, Nosler’s homogenous alloy E-Tip, Ballistic Silverip (Nosler’s AccuTip wth Winchester’s coating), and, in their Safari line, Nosler Partitions and Solids.

These are all what we refer to as “sourced” bullets, obtained from bullet manufacturers by the major ammunition makers. The majors have also been busy developing their own bullets…and maintaining old standby bullets. The latter included Federal Hi-Shok, Remington Core-Lokt, and Winchester Power Point, good bullets all. New bullets from the majors include Federal’s Fusion and Trophy Copper; Remington’s Core-Lokt Ultra Bonded and Copper Solid; and Winchester’s Power Max Bonded and homogenous alloy Razorback XT.

Hornady, however, has also become a large player in the factory ammunition market. In addition to their good old InterLock, they have quite a line of their own bullets, loaded in their own ammunition lines. These include the aerodynamic SST, the core-bonded and tipped InterBond, the homogenous alloy GMX, and, in larger calibers, their DGX and DGS.

But wait, as the infomercials say, there’s more! Between ongoing military needs and growing sporting demand the ammunition market is huge, and smaller manufacturers aren’t as small as they used to be. Black Hills, for instance, has become an important supplier, offering great hunting ammo featuring a wide range of “name” bullets, including Barnes’ TSX, Hornady’s GMX, Nosler’s AccuBond, and more. Newer companies like Double Tap are stepping to the plate, similarly with “named” bullets-but in addition to the most popular numbers, they seem to specialize in calibers and bullet weights that the majors have bypassed. (Got a .35-caliber rifle? Check out Double Tap!)

Nosler is obviously primarily a bullet company, but they now have their own line of Nosler Custom ammo-really good stuff, obviously featuring Nosler bullets. They, too, have focused on calibers not readily available from the largest companies. For instance, they offer a wide selection of loads for the .264 Winchester Magnum and, uniquely, offer a factory load for the wildcat .280 Ackley Improved.

Today there are few cartridges and combinations that you can’t find over the counter, but if you really get stumped, there are a number of “custom” ammo loaders around the country who will put together darn near anything. The custom ammo firm I’m most familiar with is Superior, a great source for ready-loaded ammo for wildcat and obscure cartridges. Reloading still remains a wonderful pastime for many thousands of shooters, and if the volume is high enough it’s still a lot cheaper, but today you can get store-bought ammo darn near any way you want it. There are two challenges: Deciding what bullets best suit your hunting needs; and determining what shoots best in your rifle. For the former, well, all hunting bullets are designed to offer certain performance characteristics. Today I really don’t believe there are any “bad” bullets on the market. Some are designed for more rapid expansion on deer-sized game; others are designed to provide deeper penetration on larger game. You probably should accept that the factory literature will contain a bit of hype, but in this electronic age there isn’t as much exaggeration as there once was. So you can study the websites, get a pretty good idea of various bullets’ performance characteristics, and make some selections. The good news: There will usually be several bullets from several makers, and thus several loads from multiple manufacturers, that will be well-suited to any given hunting situation.

As for the latter, well, rifles are finicky individuals. You can pick the one load that seems most ideal for your needs. Today’s factory ammunition is so consistent and modern rifles are so accurate that you will probably have enough accuracy for your needs-but it’s unlikely that the one load you select will produce the best accuracy in your rifle. So, over time, experiment with a few different loads before making your final selection. Some rifles are fairly consistent from one load to another, but many are not. So you may need to make some compromises between your concept of the most ideal bullet and some other bullets that will work; or between the load that’s most accurate in your rifle and a load that is accurate enough, but feature the bullet you really want to use. Hey, we’ve always had to make these choices. It’s just that, today, there are a lot more choices out there. Fortunately it’s pretty hard to make a genuinely wrong decision!