Hunting squirrels with a blackpowder gun, what a great and novel idea! It seems fewer hunters enjoy the wonderful sport of squirrel hunting these days, but leave it to me to find another reason to chase bushytails. Hunting squirrels with a small-caliber blackpowder rifle is like taking a step back in time, back when squirrels meant important food for the table.

The truth is I really didn’t even know I wanted a small-caliber muzzleloading rifle until one day I came across a half-page ad for Cabela’s Blue Ridge series rifles. Made in Italy for Cabela’s by Davide Pedersoli, the Blue Ridge rifles run the gamut from .32 to .54 caliber. A quick conversation with the folks in Sidney, Nebraska, and the Pedersoli soon arrived.

As I suspected, the Blue Ridge, while aesthetically pleasing, arrived as a very simple piece. The hardwood stock is pretty, but plain. The elongated brass trigger guard appeals visually, but it is nothing fancy. Accustomed as I am to blued metal, I was somewhat surprised to see the .32 sporting a browned octagonal barrel. However, I wasn’t surprised to see the twin triggers—a forward set-trigger and a curved rear hammer-fall.

My plan was to use my new caliber blackpowder gun to hunt squirrels. Oh, how I love chasing bushytails, but before the field, there would have to be a visit to the range.

The equipment I toted to the shooting range included my traditional range box containing cleaning accessories, loading and unloading tools, brass drifts for adjusting sights, and a complete gunsmithing screwdriver set. Because I was starting from scratch, I carried both Pyrodex and Triple Seven powders, lubed and unlubed .010-inch thick all-cotton patches, and a box of .310/45-grain pure lead round balls. I opted to use a #1075 Plus #11 cap manufactured by German ammunition maker, Rheinisch-Westfälischen Sprengstoff (RWS), a subsidiary of Dynamit Nobel. The author always carries the proper tools for his .32 caliber muzzleloader, whether shooting at the range or in the woods chasing bushytails.

After setting my target stand at 25 yards and popping three or four caps to clear the nipple and flash hole, I charged the Blue Ridge with 20 grains of Triple Seven. Atop this tiny charge, I carefully seated one of the pea-sized .310 diameter round balls wrapped in a thin and lightly lubricated cotton patch. With a cap astride the nipple, the rifle rested securely, and the set-trigger cocked rearward, I found myself peering down the 39-inch barrel at the black and chartreuse target 75 feet downrange.

To my surprise and great pleasure, this first shot printed just an inch right and an inch low. Grinning to myself, I swabbed the barrel, recharged the piece, and settled down for round two, and then was even more surprised when the second clover-leafed the first. Taking a small brass drift and hammer from my range box, I tapped the buckhorn rear sight ever so softly. Again, I swabbed the barrel, poured the powder, seated the ball, and readied the rifle. At the sharp CRACK!, a small yellow dot appeared just below center on the target. Quickly, I cleaned the bore, reloaded, and caressed the front trigger, and the result was a near report of the previous discharge.

The range time revealed several vital pieces of information. First, the rifle shot like a .22 rimfire, with instantaneous ignition. Second, a six o’clock low hold was necessary to put the ball precisely on the ‘X.’ Third, consistency, I surmised, was achieved in part due to swabbing the barrel clean between shots; thus, I would continue this practice into the field. And fourth, 20 grains of Triple Seven seemed to be plenty of propellant.

For my squirrel hunts, I take a muzzleloading shoulder bag. Inside the shoulder bag, I carry the following for charging the piece afield: short ball starter, brass powder measure, powder flask, speed-loader containing 15 round balls, lubed cotton patches, and a red plastic container of RWS #1075 caps. 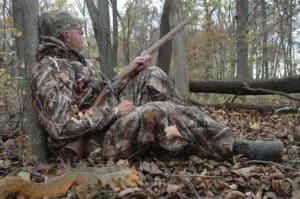 While the gun’s range may be farther, the author looks for shots at squirrels within 35 yards when hunting with his muzzleloader.

In a separate compartment of the bag, I have the following for cleaning and in-the-field maintenance: pre-cut seasoned/lubed cleaning patches, nipple wrench, nipple pick, Q-tip swabs, and ramrod accessories to include a breech plug scraper, patch puller, ball puller, and cleaning jag. I also carry an extra nipple, and two small screwdrivers—one flat and one Phillips head.

Equipped as such, I’ve never encountered a situation where I’ve been unable to strip, clean, and reassemble the .32 in the field during a squirrel hunt. The few times I have had a problem with misfires, the culprit was identified as a plugged nipple and/or flash hole. The remedy required little more than removing the nipple and clean-out screw on the drum. NOTE: The drum is the metal cylinder on the side of the barrel into which the nipple is threaded, and thoroughly reaming both with a nipple pick. Three caps and a 20-grain charge of powder, and I was ready to load and hunt once more.

The first is a 30- to 35-yard maximum range for squirrels when hunting with the blackpowder piece. Yes, the firearm in more capable hands than mine is, I’m certain, is suitable for game such as squirrels and cottontails out to distances approaching 100 yards. Ballistically, my .310 diameter/45-grain round ball over 30 grains of FFFg practically mirrors the .22 rimfire projectile (40-grain bullet @ 1,255 fps muzzle velocity) at 300 feet. The task, as I see it, is putting that tiny lead ball under a squirrel’s ear a football field distant. I fear my eyes aren’t what they used to be, and I refuse to put glass optics on the little gun. Thus, I limit myself to 30 to 35 yards.

As for the second limitation afield with the Blue Ridge, this one is personal. A miss, and that bushytail gets a pass. In the time required to patch the .32 and recharge the piece, most squirrels have hightailed it for safety anyway. But on those occasions when that fat squirrel decides to hunker down and stand pat—well, I’ll likely see him on my next trip to the timber.

To me, hunting—and squirrel hunting with a blackpowder rifle in particular—is all about that special challenge. It is a one-on-one with our most traditional wild game species. And what better way of achieving this than the one shot at a squirrel offered by that little .32 caliber muzzleloader?