Is the.300 Win Mag the Best Cartridge Ever? 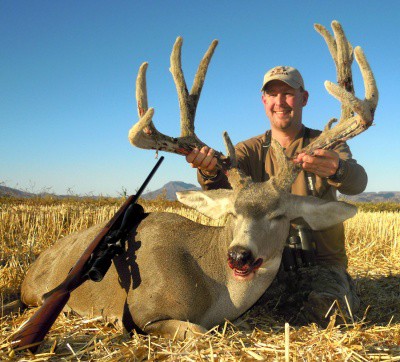 The editor and I agreed this article would probably stir up a bit of a fuss. If you don’t agree with me, that’s fine—roast me over the coals. But I am going to make a stand here and honor my favorite cartridge, the .300 Winchester Magnum. I say it is the best North American big game cartridge ever. Let’s take a look at the .300 Win Mag.

I don’t think any of us can argue the .300’s versatility. You can shoot a 150-grain Ballistic Silvertip that is a small, flat shooting grenade on contact or step up to a 200-grain, deep-penetrating Trophy Bonded Bear Claw that will do some serious damage on the largest of North American game.

A lot of folks think a .300 is going to be a kicking machine. I hate recoil and still love my Win Mag. With a good recoil pad and a rifle that fits you correctly, the .300 is not a thumper. I do have an old Browning Safari Grade .300 made in 1958 that has a high cheek pad and doesn’t fit me well. It almost knocks a few teeth loose when I shoot it, but my TC Pro Hunter single shot with a quality recoil pad that fits properly is just a joy to shoot. I am talking two or three boxes at a time!

So you want to hunt a lot of different animals, but you are not into owning a complete battery of rifles? The pronghorn and whitetail are two of the smallest and most popular big game animals in North America. The moose and the grizzly are a couple of our biggest. You might even want to sneak over to Africa or New Zealand to do a hunt, right? The .300 Win Mag is your caliber.

The 150-grain loads in a .300 are smoking. With an average velocity hovering around the 3,200 to 3,300 fps mark, these light weights are great for deer and antelope, really any game that inhabits open country where shots might come at 250 to 300 yards or beyond. The Winchester Power Max Bonded has a ballistic coefficient .325, which is pretty good and typical of bullets in this weight class. There won’t be nearly the drop compensation needed as with some of the heavier loads, so long shots really become much easier with a 150-grain bullet.

My all-time favorite load for 90 percent of the animals I have hunted worldwide is the 180-grain load. For almost everything, I shoot a 180-grain Accubond or E-Tip. These bullets have a superb ballistic coefficient (.509) and still get 2,950 fps at the muzzle. Their accuracy and controlled expansion in game animals is unequalled in my opinion. With a 180-grain bullet out of my.300 Win Mag rifles, it would be tough to count the big whitetails, mule deer, bears, elk, and African plains game up to kudu I have taken over the years. I am going on two safaris in the next four months, and a .300 will be one of two rifles on both trips.

If we look at the biggest North American game, mainly the moose, brown bear and polar bear, the .300 will still stand in there and do us proud. A 200-grain, premium bullet like the Nosler Partition will be plenty sufficient to bring down any moose or bear that walks the grounds of North America if properly placed in the heart and lungs. I would also submit that the .300 Win Mag is an inherently accurate cartridge. My half dozen or so .300s all shoot extremely well with multiple bullet weights and types.

I have hunted much of the world’s big game in one form or another, and besides elephants, buffalo and elands, the .300 Win Mag with the right bullet would far and away be my choice for almost any game animal that can be hunted. An added benefit is that you can own one gun that you are intimately familiar with and shoot vastly different loads. Agree or not, you have to admit, a pretty good case can be made that the .300 Win Mag is the best North American big game cartridge ever.