I missed out on Marlin’s first bolt-action centerfire rifle. Oh, I put a few rounds downrange with two or three of them during the course of my job as a firearms reporter, but I never had the foresight to plunk down the nearly $600 it would have cost me to own one. It was a bit of a surprise when, in 1996, Marlin—with its reputation as a pre-eminent maker of fine leverguns—introduced the MR-7 bolt-action repeater in standard calibers such as .30-06.

It wasn’t quite so surprising that the MR-7 was discontinued just three years later. Leverguns had made Marlin, and Marlin was going to focus once again on making leverguns. Why was the MR-7 a firearms flop? It had reasonable good looks and a prominent name behind it, some pretty good features like a 3-position safety, and it shot well, too. Maybe the shooting world just wasn’t ready for a Marling bolt-gun.

Last year the Connecticut business surprised us all again with the introduction of yet another bolt-action repeater chambered in .270, .30-06 and .25-06. This new X7 has good basic features, a nice overall appearance, and, with an MSRP of just over $300 for basic black is priced to compete. During the past four or five years a number of rifles have been introduced by companies that were previously not in the bolt-action business. Everyone wants their piece. However, while these other companies tried to reinvent the deer rifle, Marlin engineers—perhaps guided by experience—took the smart road and built the X7 based on ideas and manufacturing techniques that have long since proven themselves in the market place.

For example, the X7 stock is of otherwise ordinary injection-molded black plastic. But Marlin borrowed an accuracy-enhancing feature that helped resurrect Savage Arms—simple steel pillars embedded in the stock that allow for consistent receiver placement and guard-screw pressure. Savage’s user-tuned AccuTrigger also made other riflemakers step to the plate with adjustable triggers. The X7’s Pro-Fire can be adjusted down as light at 2.5 pounds and breaks crisply and consistently, with a nearly imperceptible deviation range of about 4 ounces in my experience. Both the pillar bedding and the adjustable trigger, along with a button-rifled barrel, make the X7 pretty accurate right out of the box. 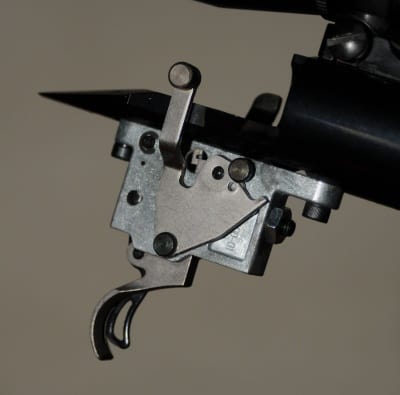 Other X7 features have more to do with manufacturing efficiencies, such a removable bolt head which allows Marlin to make only one bolt shank that will handle any number of cartridges should the line be expanded. The use of a barrel nut allows the manufacturer to make receivers without integral recoil lugs, and it speeds up the process of headspacing during barrel attachment, increasing productivity.

If a rifle is cosmetically appealing, then you know the manufacturer is really taking the American shooting public into consideration. We conservative Americans tend not to like our rifles overly fancy, but we do want them to look good. This is likely why the X7 features a fluted bolt shank (which also serves to reduce bearing surface between bolt and receiver) and a low-profile bolt shroud. If you compare the sturdy good looks and utility of this rifle to some of the others that have been introduced in the past couple of years, you can tell right away that the folks who designed it actually put a little thought into it. The result is a 6.5-pound rifle that the average American deer hunter can afford and would love to carry into the woods.

After shooting a preproduction prototype, I purchased a black X7 .30-06 last year and topped it off with a fixed 6X Leupold FXII because I could use this configuration for a variety of hunting situations, from moose and black bear to wild hogs. This rifle—its trigger still factory-set at 3 pounds, 14 ounces—shoots pretty well. The most accurate load I’ve found so far is a 180-grain Hornady InterLock softpoint, a traditional deer bullet that will also handle elk and black bears. Half-inch groups are standard. It also groups Remington’s 180-grain Swift Scirocco load reasonably well at 1½ inches—penetration and accuracy-aplenty for most hunting situations. Before I actually got my rifle, though, I used a nearly identical .30-06 to shoot a wild California hog with a Winchester 180-grain E-Tip load. That bullet, introduced specifically for California where lead-core bullets are no longer allowed for hunting in much of the state, passed completely through the young bore’s shoulders at a distance of about 100 yards. When a product sells well, a manufacturer finds ways to sell even more of them. This year Marlin has introduced several new X7 options. Original options include blued rifles with black or Realtree APG camo stocks in .270, .30-06 and .25-06. To this Marlin as added a walnut stock option and a laminated hardwood stock option. In addition, there is now a short-action (XS7) version chambered in 7mm-08, .308 and .243 in all the above stock options. There’s even a Youth Model. I thought my one Marlin bolt action would be enough. However, I’ve become very fond of the laminated X7’s classy good looks, and I’m thinking I probably need one in .308. Well, at least I know it won’t cost me an arm and a leg and it will last a lifetime. After all, it’s a Marlin.