Want to start an argument? Walk into the shotgun section of any sporting goods retailer and say in a loud voice, “the (fill in name of favorite shotgun) is the best turkey gun today, and I’ll tell you why!” Chances are within seconds, you’ll have a line forming consisting of turkey hunters just dying to explain why you’re wrong.

The search for the ultimate turkey shotgun has been going on nearly as long as has the debate as to whether or not the 6-mm rifle cartridge is an acceptable caliber for whitetail deer. And to tell you the truth, those arguing have found few cut-and-dried final answers. What’s the reason behind this apparent lack of reason? It all lies in that word—ultimate.

For example, the mere existence of an auto-loading shotgun that can cycle 2.75-inch, 3-inch, and 3.5-inch ammunition should not lead one to the conclusion that this is the ultimate turkey shotgun. True, such a piece might be versatile, and perhaps even mechanically superior to others. But is it the ultimate?

This said, accessorizing a turkey-specific shotgun is not a search for perfection, but rather a quest combining personal preference, mechanical ability, and performance with a few side variables thrown in for good measure. But again, let’s assume we were hell bent on creating the ultimate turkey shotgun, the very best of the best in every way. What might this firearm look like? What would it be? Step by step, we’ll take a look at Franken-Gun in the first person, and we’ll see if it might actually live.

The gun without question would be a 12-gauge and most likely chamber 3.5-inch shells. This is a versatile foundation, with the widest variety of makes, models, shotshells, choke tubes, and aftermarket gizmos available. I want the option of heavy payloads, but without the weight of a 10-gauge long gun.

Is the 3.5-inch chamber necessary? No, but the option is nice, especially if this shotgun might see double duty as a waterfowling piece in the fall. And it is true; some shotguns pattern better with a 3.5-inch shotshell. I don’t shoot them, not enamored with the recoil or the cost of the ammunition. As for action type, I want a quick and accurate second shot, so it’s a pump or semi-automatic for me. Yes, I’m thinking one shot/one gobbler, but it’s nice to know there’s a second round ready.

Shorter is better, in terms of barrel length with 24 inches being the maximum. Twenty two inches is better still. Remember, you’re choking this creation down tremendously, plus, 21st century ammunition is helping there, too. Barrel length and patterns really don’t enjoy the relationship they did back in the day. Short barrels mean a lighter and a better-handling gun, not that I’m whipping it around like a Frisbee. 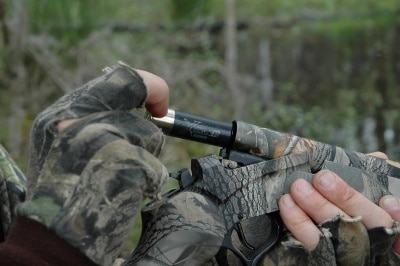 Call me a traditionalist, but I’m partial to a good, old-fashioned full stock, with a effective recoil pad; however, the new thumbhole stocks are awful nice, and certainly do help you hold a gun rock solid while that gobbler makes up his mind. Still, I’m going traditional. Choke Selection Specialized turkey choke tubes are not magic. The modified or full tube that came with your new shotgun may be your best performer, but it’s going to take time on the range to determine that. I do like an extra-full or turkey-specific tube, and I’ll experiment with different ammunition until I find a load that works consistently out of that particular tube. So yes, our creation has an aftermarket or extra-full choke.

Two words—red dot. I’ve used scoped turkey shotguns, and I don’t care for the way they reduce my field of view. Also, follow-up shots, if necessary, can be extremely questionable, unless you’ve practiced gunning moving targets with a scoped shotgun. Traditional beads, on the other hand, can be crude for this choked-down MOA-esque firearm. Red dots provide a margin of aiming error, such as what happens when you lift your head from the stock. Correctly dialed in on the range, simply put the dot on his wattles and squeeze the trigger. Game over. Camouflage? If it matters to you, go ahead and do it; but mine isn’t. It does, however, sport a dull matte finish and plain Jane wood, and up until now, no longbeard has ever seemed to care that she’s not dressed in the latest, greatest camo scheme. The final piece is a sling. After all, you’re just a life support system for that shotgun during the whole of turkey season. Shouldn’t you be as comfortable as possible? So, sling yes; camouflage, okay yes. Unlimited bells and whistles, or old-school traditionalism; it really doesn’t matter what this Ultimate Turkey Gun looks like or carries for accessories. What matters is that you’ve spent the time necessary on the range to become 100-percent confident with that firearm. You know, without a doubt, what that gun will do at X-yardage every time, every time, you pull the trigger. Then, and only then, does a regular shotgun become the ultimate turkey gun.