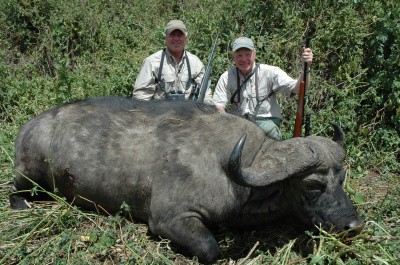 The concept of the “all around rifle” is both seductive and elusive. Seductive: Wouldn’t it be wonderful to have just one rifle that would do everything? Elusive: Can one rifle and cartridge really be suitable for the entire world’s big game? To the former, an emphatic “Yes!” To the latter, a guarded “Maybe.” Usable, sure, but the spectrum is too wide for any one cartridge to be ideal for everything from pronghorns to big bears, from gazelles to elephants-or from desert, plains, and tundra to mountains, swamps, and forests.

Selecting just one rifle and cartridge requires serious compromises. Since its introduction in 1912 the .375 H&H has been the worldwide favorite for the elusive title of the world’s most versatile cartridge, the all-around top gun. Today, 98 years later, it still has few competitors. Most of what little competition it has comes from newer .375-caliber cartridges with more modern case designs, cartridges like the .375 Ruger, .375 Remington Ultra Mag, and the two .375-caliber Weatherby Magnums, the .375 and .378. All of these are fine cartridges, all somewhat faster than the original H&H with its long, tapered case, and the shorter, fatter .375 Ruger can be housed in a shorter, lighter action. You could properly say that all of these are “better” cartridges than the .375 H&H-but none of them come near in worldwide popularity, and I seriously doubt that any of them ever will.

Partly this is because of entrenchment and tradition. Here in North America the actual utility for a cartridge this large and powerful is limited, and above .30 caliber the demand drops like a rock. The .375 has filled the niche as the most popular big bore for many years, and this is unlikely to change. Most manufacturers chamber for it, and there are plenty of factory loads and handloading recipes to choose from. Partly, too, it’s a matter of efficiency and shootability. The faster .375s definitely shoot flatter, but when you add velocity recoil goes up quickly. This is aggravated when you reduce gun weight. Most shooters can learn to handle a .375 H&H of adequate weight (say, nine pounds all set to go). Add a couple hundred feet per second, take off a pound of gun weight-or both-and recoil becomes objectionable for many of us. The .375 H&H Magnum was introduced by the great British gunmaking firm of Holland & Holland in 1912. It was not their first attempt at a .375-caliber cartridge. At the beginning of the 19th Century inexpensive European bolt actions, mostly Mannlichers and Mausers, were cutting deeply into the British gun trade. One of the popular numbers was the 9.5mm Mannlicher-Schoenauer, a mild but very useful cartridge with bullet diameter of .375-inch. In 1905 Holland countered with the .375 Nitro Express, also called “.375 Velopex.” The cartridge was an anemic flop, best remembered for two things: It was the first commercial belted cartridge, and it was the forerunner to Holland & Holland’s most enduring cartridge development, the .375 H&H Magnum.

The word “magnum” comes from an extra-large bottle of champagne, first used in cartridges in the 1880s to describe a larger case on an existing bullet diameter. The .375 H&H is thus a true magnum in every sense, since it kept the .375 bullet diameter, but used a much larger case and developed considerably higher velocity. Original bullet weights were 235, 270, and 300 grains, at a bit lower velocities than are standard today. Over the years the light-for-caliber 235-grain bullet dropped off, at least in factory loads, with the 270 and 300-grain loads far the most common today. Component bullets are available from 220 to 370 grains, and Norma offers a 350-grain factory load. Today standard velocities are 2690 feet per second (fps) for the 270-grain bullet and 2530 fps for the 300-grain load. These are not flashy ballistics by today’s standards. However, the 270-grain load has a trajectory curve very similar to the 180-grain .30-06, meaning it reaches to 250 yards with no difficulty, and will do at least a hundred yards better if you know what you’re doing. Because of the velocity differential, both bullets develop well over 4000 foot-pounds of energy, making them adequate for any game on Earth.

In the United States factory .375 H&H ammo has been loaded since the 1920s. It was one of the initial chamberings in the Model 70 Winchester in 1936, and has been chambered to most American (as well as European) bolt actions ever since. Its only stumbling block is that it requires a “full-length” action to house its 2.8-inch case. There are some bolt actions (like the standard Ruger M77 and Savage 110) that are built around the .30-06’s 2.5-inch case, so it has not been offered in all bolt actions-but it has been and remains a standard chambering in virtually all actions it will fit into.

Realistically, in North America there is very limited actual need for a cartridge as powerful as the .375 H&H. Equally realistically, there are relatively few things worldwide that it is truly ideal for. Over here I think it’s just perfect for our biggest bears, but it’s more powerful than is needed for just about everything else, so in most situations a cartridge that shoots a bit flatter and kicks a bit less would be a better choice. In Africa I think it’s perfect for lion, and absolutely ideal for eland, the largest antelope. It is absolutely adequate for buffalo, but if I were to pick the perfect cartridge just for buffalo I’d step up a bit in caliber and bullet weight. With a 300-grain solid it is also adequate for elephant, but I don’t think it’s ideal.

What it is, however, is the perfect compromise cartridge-flat-shooting enough for most game under most conditions, yet powerful enough for the very largest game. When I was a kid I used my first .375 H&H almost exclusively for several years. I have used it for pronghorn, mule deer, caribou elk, and moose as well as black, grizzly, and Alaskan brown bear. Heck, I even took my first wild sheep with that old .375! It’s actually a very good cartridge for elk and moose, and it’s a real thumper on big bears. As for the rest, well, that just shows what you can do with it, not what it’s ideally suited for! In Africa I have taken more buffalo with the .375 than with all other cartridges put together, and it works just fine. Even so, for exclusive use on thick-skinned game I’d go heavier. On the other hand, I have used the .375 to take a tremendous variety of plains game from pygmy antelope to eland, and I’ve used it on leopard as well as lion. In Africa it is the ultimate jack-of-all-trades. Together with the newer .375 cartridges it offers one of the only sensible choices for a one-rifle safari battery, capable of handling all the game one might encounter.

In 1989 and again in 2007 I conducted surveys of African professional hunters for my two safari rifles books (Safari Rifles, 1990;Safari Rifles II, 2008. In both surveys, whether for a one-rifle battery or the heavier of two rifles, the .375 H&H was the overwhelming recommendation. I believe there are two reasons for this.  First, the .375 H&H just plainworks. It is adequate in power and unsurpassed in versatility. Second, most people can handle its recoil and will shoot it well.  It will start into its second century still going strong, and in its unique niche as the world standard all-around cartridge I doubt it will ever be replaced.