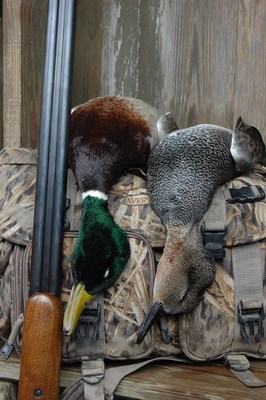 Waterfowlers in the 21st Century have a problem when it comes to shotguns and ammunition. No, it’s not that they choices are too few. No sir, the menu for both shotguns and shotshells reads like something akin to Tolstoy’s War & Peace. And then there are the options. Would you like 3-inch only? Or do you desire something that cycles everything from 2 3/4 through 3 1/2-inch shotshells. Camouflage? What pattern? Synthetic black or walnut? You name it, Mr. Shotgunner, and it’s out there.

Ammunition’s no different. From 10-round boxes to the traditional 25-round pack we all grew up with, it’s available. Steel, speedy steel, hybrid steel, and pseudo-steel; it’s there. You looking for a designer non-toxic load, something similar to the old reliable nickel-plated  No. 5 lead shot you used back in the day? Someone’s making it, I’m certain.

Today’s waterfowler has a selection of firearms and ammunition unlike no other time in history. Let’s take a look at the new, as well as the not-so-new for 2008. These are the shotguns you’ll see afield this fall and winter, perhaps you’ll even shoulder one of these yourself come the opener.

When it was introduced, I didn’t care for Mossberg’s do-all waterfowl gun, the Model 935. My thoughts have changed a bit, and today, the M935 is my waterfowl gun of choice. The gun is capable of handling 3- and 3 ½-inch shotshells and is a homely, barrel-heavy, hard-recoiling thing, but kept clean, it does everything I want it to do, and that’s be reliable. The company also has a M930 (2 ¾- and 3-inch), as well as their 3-1/2 inch workhorse pump-action, the Model 835.

I like the Winchester SuperX3—maybe not as much as I liked the SuperX2, but it’s still a dandy piece at a reasonable price. The models I worked with in Mississippi last Winter functioned perfectly and handled well. The Dura-Touch coating is a definite plus in terms of getting a grip, especially during  The Wet. Light to heavy loads aren’t a problem and the choke system is Winchester’s Invector-Plus.

Sure, the folks in North Carolina have their new waterfowl-specific piece, the Model 1-87 XCS, or Extreme Conditions Shotgun. I’m still a fan of their old-style Model 1100, 11-87, or the best-selling shotgun on the planet, the Model 870 pump. Still, the 31/2-inch XCS does feature a browned finish, and Mossy Oak’s Duck Blind camouflage pattern, if you’re into such things. There’s also the SP-10 for 10-gauge buffs, and the gas-works CTi—a nice piece, but the self-feed and bottom-eject do take some getting used to.

Said to be the world’s most reliable autoloader, Benelli’s Super Black Eagle (SBE) II comes with a price, and a high one at that, but it does everything the company says it will and then some. Personally, I’ve never heard an SBE owner complain, at least not about the gun. Myself, I’m partial to the Darth Vader Gun, the Nova pump action. I’ve used one on the saltwater in Washington for several years now, and have nothing but praise for the piece.

I was introduced to the Beretta Xtrema2 a couple seasons back, while gunning eiders off the coast of Maine. Despite brutal weather conditions and an admittedly poor gun-cleaning program while in camp, a dozen or more Xtrema2s functioned flawlessly, and showed little or no pitting as a result of the salt spray. As for the Kickoff Recoil Reduction System—excellent!

The good news – Winchester’s Xtended Range Hi-Density tungsten hybrid ammunition is a better performer than lead. The bad news? It runs from $3.20 to $3.50 per shotshell. That said, if you don’t shoot much or you have deep pockets, Xtended Range is without question worth trying. If you don’t have deep pockets, the company’s Xpert Steel or High-Velocity Steel are good alternatives. Kent made their waterfowl name with their hyper-velocity FastSteel loads. Now they’ve tamed it down a bit, both in speed and in price with an all-purpose, 3-inch steel round suitable for the marsh as well as the uplands.

Tungsten-based non-toxics and the Oregon-based company, Environmetal, are, to many, close to synonymous terms. The makers of Hevi-Shot, the folks in Sweet Home offer something for all waterfowlers, including their new Classic Doubles, suitable for use in older shotguns and available in 16 and 28 gauge, as well as .410-caliber loads. Watching pennies? The 1,550-fps Hevi-Steel works wonders on birds without killing your wallet.

Two words—Black Cloud. Introduced in 2007, the funky-looking spherical steel pellets mixed with traditionally round shot took the waterfowling world by storm, with a marketing campaign second to none. As for the performance of the fancy loads, I found they worked well on ducks up close. However, my jury’s still out as to their effectiveness on geese or large sea ducks such as eiders. Better Federal’s High Density rounds for the big birds. If you haven’t heard of this outfit from California, it’s time you did. Wolf offers several different, and quite good, steel waterfowl choices, all at affordable prices. There are some nice non-toxic upland loads there, as well.