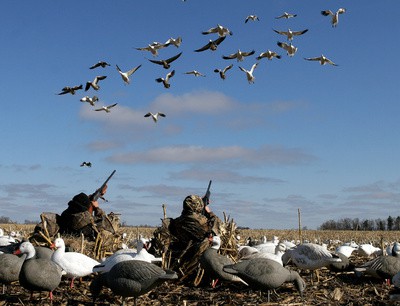 Hardcore snow goose hunters are familiar with the name Tony Vandemore. Together with his gunning partner, South Dakotan, Tyson Keller, Vandemore, a Flyway Manager serving with Avery Outdoors, and his crew of fanatical waterfowlers have redefined today’s Spring Conservation Order, the federal mandate that allows the very liberalized hunting of snow geese throughout the months of February and March and into April. Hundreds upon hundreds of full-bodied decoys, thousands of road miles, countless hours of lost sleep, and full course meals consisting of monster energy drinks and cold pizza have resulted in almost 10,000 white geese on the ground since 2006. Yes, I said 10,000.

Today, Vandemore calls north-central Missouri home. However, when the south breezes blow through the Show Me State, the former pitcher for the San Diego Padres farm club can be found anywhere from his home in Kirksville west to the Missouri River Breaks—anywhere, that is, where there are snow geese. Recently, I had the chance to do a little snow goose question and answer session with Vandemore, who was taking a breather from his latest venture, Habitat Flats, an intensively-managed waterfowl guiding operation he’s co-founded with MOmarsh creator, Ira McCauley. So, students, grab a No. 2 pencil and a tablet, here’s your Spring snow goose tutorial, courtesy of one of the best in the business.

True or False? There’s no reason to hunt afternoons, afternoons are meant for scouting.

Vandemore: Definitely false. The birds I like to hunt are the migrators, the ones that get up at daylight and leave southeast Missouri. They get up here around two or three o’clock, and they’re tired and hungry. Those are the days you wait for. That said, though, we’ll always have one or two guys scout in the afternoon. True or False? Success with spring snows is all about decoy numbers, and the more the better. Size matters, yes?

Vandemore: Realism, it’s all about realism. How important is camouflaging the blinds completely? Vandemore: The blinds were critical. It’s all attention to detail, and we try to improve each time we’re out. We like the Avery Finishers because they cover people completely, but then we had to watch things like were the doors getting shut all the way? Were things—a blind bag, let’s say—left outside that could have used more covering? When you’re going to this much effort, there’s no sense in doing things halfway. You use retrievers in the spring. How did you hide them? And how did you work with them?

Vandemore: We use Ground Force dog blinds. A lot of guys will put their dogs behind them. I like to have mine—the dog blind—slightly behind and touching my blind. My “Ruff” is pretty steady, but some dogs aren’t. The way I have mine positioned, I can talk to him, “easy…steady,” if I need to, plus he’s tracking birds right down the gun barrel. It’s a safety thing, too. When you have three honkers come in, you shoot three times and everything’s dead. But with 1,000 snows and a dog that breaks, the first shot goes off and he’s 20 yards into the decoys where everything’s happening. It’s not good. Plus, spring snow goose hunting is an incredible opportunity to get dog work in.

What makes you guys consistently successful on spring snows?

Vandemore: Scouting, and not doing anything halfway. We had to commit to long hours. The boys averaged roughly three hours of sleep a night for 30 straight days. And meals? All were on the run. Vandemore: We had people in place—needy families, church pantries, soup kitchens—to take the birds before we started hunting. Snow goose is by no means poor table fare. It’s actually very good. With snows, you can pick out the (grey) juvenile birds a lot easier and concentrate on those. But I had folks lined up who would take just about every snow goose we could take to them. Spotlight on Gear

Spring snows and intensive scouting typically go hand-in-hand. That said, some of your best equipment should include a stocked gas card, a quality binocular, and a copy of DeLorme Mapping’s Missouri Atlas & Gazetteer. Along with scouting, mobility is vital to Spring success with the white geese. Lightweight blinds are popular, as are combination spreads of Greenhead Gear’s T & T 5/8 Shells, traditional half-shells, and windsocks or Texas rags.