Chuck Adams – Most Successful Bowhunter in History: An Interview

Chuck Adams reveals what it takes to keep bowhunting—even into your 70s.

Chuck Adams is perhaps the greatest bowhunter of all time. That’s a bold statement, but consider this. In 1990, Adams became the first archer in history to harvest all varieties of North American big game—a feat called the Super Slam. As I write this in early August 2022, he has more than 210 Pope and Young record-book entries, which is more than any other hunter in history. In addition, he’s racked up six bowhunting World’s Records. Adams turned 71 in May, and I was able to track him down before he headed back to Alaska to hunt solo for Sitka blacktail deer. Here’s what he had to say.

You started bowhunting in California when you were 13. Why bowhunting?

The minimum age you could hunt big game there was 12, and both my grandfathers and dad had great hunting spots. As a young kid, I would think about hunting deer all year. Using a rifle, I got my deer down in a few days, and I thought it was a lot of anticipation for the pay off. I took up bowhunting, so I could hunt more and kill less. I got my first deer with a bow at 16. It took me three years to do that, just like my hero Fred Bear. How do you continually get out there and get it done? What’s your secret?

It’s probably genetics. My dad was packing deer on his back when he was in his 80s. And I live a really healthy lifestyle. I don’t drink alcohol. I don’t eat domestic red meat—it’s all wild game. I’m out there hiking around and doing something all the time. I can tell you I still feel like I’m 30. I carried three deer back to my camp [last season] about five miles. The average Sitka deer is 60 pounds of boneless meat.

How often do you practice shooting your bow?

I talked to a doctor about 20 years ago because my friends were having shoulder issues. My doctor said I would be better off shooting less. So that’s what I did, and I’m one of the few guys over 60 that I know who has had no shoulder problems. And I usually shoot a 75-pound bow.

I’ll usually start shooting 20-30 arrows twice a week in May. Then in July, I shoot about 60 arrows each week. I always warm up with about five minutes of shoulder rolls. I also take time between shots to re-oxygenate my muscles. When I shot tournament archery, I watched people shoot too fast, and they didn’t let their muscles or their mind recoup between shots.

Did you ever go on a hunt and think you weren’t going to make it back?

I wrote about the “Death March” in one of my books about a hunt in British Columbia in the 1970s. We had 29 horses and mules when we started, and nine of them died on the trail because of malnutrition. The hunt was set up with one of the companies I worked with, and they didn’t do their research. It started snowing, and we didn’t dare ride the horses except to cross the streams, which we did 28 times—I counted. If we all hadn’t been in good shape, I’m not sure what might have happened.

How much does luck play into hunting—bowhunting in particular?

It’s huge—sometimes. For example, I didn’t expect to kill the new World’s Record typical velvet Sitka deer last year, and it was the first deer I saw on the trip. Overall, though, luck is fairly small when it comes to planning. The most important thing in bowhunting is persistence. If you’re persistent enough, you will overcome anything. Do you ever kill anything without big antlers? Do you take all that meat home?

I love the meat, and I pack it all out. I eat the heck out of wild game. Nowadays in Alaska, the excess baggage fees have gotten so high that I donate some meat to the local mission on the island. If my bush pilot needs meat, I’ll sign it over to him. And the laws are pretty clear about wanton waste. This year I applied for a cow elk permit in Wyoming, which I’ll probably get. And one in Montana, too.

Most folks can’t say they hunt for a living. Can you say that?

No. I make a living, so I can hunt. I write, do seminars, TV shows and rep a few companies that I like, so I can go hunt. If I felt any pressure to hunt, I think I’d quit. I hunt for fun, not to make money.

Any hunt you would never want to do again?

Polar bear. I was 1,000 miles away from my outfitter, and it was a rodeo from start to finish. My guide said he had the best dogs, but they had supposedly run away, so he had another set of dogs that were terrible. They ran away from the first bear we saw. I ended up stalking that bear myself.

Do you have a state or terrain that speaks to you more than others?

My two favorite states to hunt are Montana because of the variety of game and Alaska because there you can hunt most species without a guide. I only go with a guide if it’s legally required. I’ve been bowhunting for 50 years, so I don’t really need one. Guides do have knowledge of the area. But honestly, I wouldn’t want another Chuck Adams guiding me because two bowhunters make twice as much noise as one. 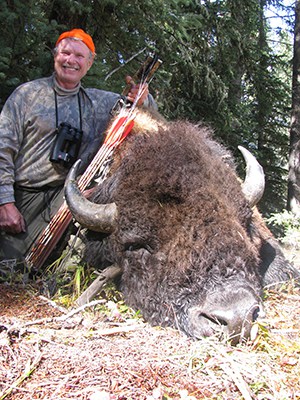 Chuck Adams with a bison.

In just about every photo I see of you, you’re wearing the same faded camo and old boots.  Why not upgrade to high-tech camo?

I don’t think all those new camo patterns work as well as merino wool and traditional stuff. I think it’s a stunt. That stuff is too expensive. You can fade a pair of black Levis and be just fine. Today, I would say there is a cult following all those camo patterns. When guys show up at hunting camp all wearing the same fancy camo, I just laugh.

Any plans to hang up your bow and take up golf?

I’ll hang up my bow when I can’t put one foot in front of the other. I’ve got 211 Pope and Young animals, the most of any hunter, and my buddy Frank is trying to catch me. That’s really not the reason, but I am challenge oriented. I can’t stand the thought of running a race and even seeing anyone close. I hunt because I love it. I think the bottom line is that I enjoy bowhunting as much as I ever have. The glitter has never worn off for me.

12 Tips to Help You See More Deer on Archery Opener