A saltwater fishing pier gets no respect.

In fact, the general impression many people have is that folks who fish from a saltwater pier are young, elderly or don’t own or have access to fishing boats. While that may generally be true, there are some savvy saltwater anglers who know that under the right conditions, the best place to consistently catch fish is from a good marine pier. Plenty of great-eating fish are caught from saltwater fishing piers, including flounder.

Important fish species are caught regularly from piers, including flounder, sheepshead, black drum, whiting, pompano and others. Heavyweight tarpon, kingfish, snook, seatrout, even sailfish have been landed from piers, too. And a number of world-record catches have been made from piers, including Walter Maxwell’s 14-foot, 1,780-pound tiger shark near Myrtle Beach, South Carolina that took five hours to land.

Timing may be the single most important factor contributing to successful saltwater pier fishing. Not only do anglers have to know what the most productive tides are for fishing at a given pier, but to be most successful, trips must coincide with major “runs” or migrations of fish species.

Experience is the best teacher in learning to time runs. But talking with pier-fishing regulars, reading local newspaper fishing reports, speaking with tackle-shop proprietors and pier anglers is a quick way to learn when certain fish species are most likely to be available.

Such inquiries should yield information about when, for example, the Spanish mackerel run works in close to a pier, or when bluefish “are in,” what time of year sheepshead are available, or kingfish, snook, pompano, etc.

It helps to be observant, too. When possible, visit a pier to learn what’s going on. When piers are unusually crowded, there’s good reason. If 100 people line the end of a Florida Panhandle pier in spring, it’s a good bet they’re not there to soak up sunshine. Pier fishing is fun for many anglers, offering hard-charging fishermen a place to wet lines, as well as for leisurely anglers to kick back and dangle a baited hook.

When such a congregation of fishermen are spotted, take special note of the tide phase they’re fishing, wind direction and speed, water clarity, weather conditions, and where anglers stand along a pier and on which side when casting baits and lures. None of these things are just chance events, and wise are anglers who keep a notebook log of such conditions.

And don’t be shy about talking to pier fishermen. The fraternity of anglers on “the boards” is usually very friendly, and many folks are more than happy to share information about how, where and when they’re catching fish.

The best pier tide phases usually are moving ones, often the early stages of flooding or ebbing tides. But this isn’t always the case, and only by checking a tide table and watching which way saltwater runs near a pier will you know what the tide is doing. Wind speed and direction play an important part in tide flow and its speed. By noting the wind, and its relationship to tide, you’re adding important input to your mental computer to duplicate fishing conditions that dictated the action had at a pier during a given day.

Tide phase and wind also affect water clarity. The clarity of the water frequently is paramount in the type fish caught from a pier, their location, how they’ll feed and what they’ll strike. Weather is vitally important, too, with often the best action coming just before or immediately after violent storms. A special “lift net” is valuable in raising large fish from the water surface to a pier.

Wind, waves and tides slamming into a pier typically form an undulating bottom around pier pilings, as well as sloughs or troughs that usually run at a right angle to a pier and parallel to a beach. Varied bottom depths and gouged-out sloughs form underwater highways for marine fish just like they do for freshwater fish.

However, in saltwater such bottom structure frequently is shifting, which can alter the location of baitfish and sportfish. Pier fishing regulars realize this, and through experience know where the best sloughs and holes are located during a given tide phase, at a certain time of year, for a specifically-sought fish species.

Some days, for some species, the up-tide side of a pier may be most productive, for example. Other days, the down-tide side, in a deep slough, yields the most fish. By watching where savvy pier anglers habitually cast during tide phases, times of day, year, etc., a neophyte angler quickly learns where to fish a pier.

If you’re completely new to the pier fishing game, make a scouting survey of the action—and the players—before joining the fun. Take stock of the rods, reels, baits, lures, and other gear they employ. None of it is nearly as hodgepodge as it may seem to an untrained eye.

Serious pier fishermen usually tote all their angling paraphernalia in a cart or wagon of some type, since it’s usually a long walk from a beach parking lot to a pier fishing spot. In a wagon an angler can place bait bucket, tackle box, rods (some anglers rig wagons with rod holders on their sides), cooler for drinks, lunch and bait, and other needed gear.

One important item all pier anglers need is a specialized hoop net or pier gaff, which is used to lift good-size fish from the water up onto a pier. Even a fish of a few pounds easily can break fishing line or pull hooks out if it’s simply hauled up 50 or 100 feet from the water’s surface.

Varied types of tackle, baits and lures are employed for different types of pier fish and fishing conditions, and only by watching and asking questions of pier regulars will anglers know what to use, when, and for what species. Virtually all types of tackle can be used successfully on piers, at least some of the time. Heavy 16/0 revolving spool big-game outfits to tiny ultralight spinning gear all has its place. 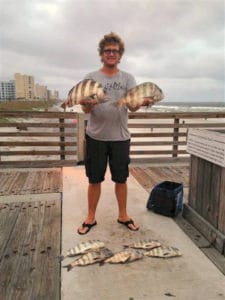 Sheepshead are a popular marine pier angler target. They are fun to catch and great on a dinner plate, too.

The heavy stuff generally is used for sharks, tarpon, stout drum and other giant fish that run far and fight hard. Mid-size revolving spools and spinning tackle is serviceable for kingfish, cobia, jacks, snook, flounder, and other species. Light-action spinning or even fly gear can provide anglers with top sport for ladyfish, pompano, bluefish, sheepshead, whiting, croakers, spots, weakfish, grunts and others.

Most good commercial fishing piers have bait-and-tackle shops on them or at least nearby. Usually just the right baits (sand fleas, shrimp, crabs, mullet, mud minnows, etc.) can be purchased at a pier. All piers have their regional favorite lures for varied fish species, and wise is the angler who has some of them with him. But a standard good saltwater lure selection of jigs, spoons and plugs should serve any pier angler well.

Pier fishing is as simple or as complex as you care to make it. You can go whole hog with sophisticated tackle, have lots of rods and bait, use a fully-rigged pier wagon, and aggressively pursue fish all around the pier.

Or, on the other hand, you could just take a can of bait and simple spinning outfit, cast out, sit down, and let time pass you by as you wait for fish to chance by.

For the $5 or so it costs for admission, the saltwater fishing pier may be the best angling bargain in America. Where else can a person enjoy the sea, either solemnly or in company; watch the sun sail serenely over the sea; probably catch enough fish for supper; and maybe even land a fish that’ll set a world angling record?