There’s nothing more frustrating than missing an easy shot at a target or an animal. It happens to everyone, of course, but it usually happens because of human error. Still, we blame the weather, even the animal. Some of us even blame the gun. A solid rest is a vital ingredient in accurate shooting. A bipod is ideal, but anything that prevents your muzzle from moving will help.

“It’s usually not the gun. Even inexpensive guns shoot pretty well these days,” says Tim Fallon, owner of FTW Ranch in Barksdale, Texas, and founder of the Sportsman’s All-Weather, All-Terrain Marksmanship course.  “The scope may be loose or damaged, but pretty much any modern bolt-action rifle will shoot well enough. You should make sure your gun is sighted-in before you go hunting. That should never be an excuse for missing an animal.”

The number one human error in any miss? Flinching. There’s no question rifles kick, some more than others. That recoil, no matter how slight, causes shooters to slap the trigger, buck forward, lift their head or tense up as they anticipate the shot.

“Get the rifle snug into your shoulder. It may seem like the opposite is true, but that actually helps soften the recoil,” he notes. “Get your cheek solid on the stock, too.”

Fallon recommends slip-on shoulder pads, and he says every rifle should have a high-quality recoil pad attached to the butt. Ear protection is also vital, particularly on the range. What matters more, is simply rolling with the recoil, or as Fallon calls it, riding the bull. Instead of tensing your shoulder, relax your entire body. That allows the rifle’s rearward energy to travel through your entire body instead of directly to your shoulder when you squeeze the trigger.

Focus On The Basics

Pulling the trigger may seem like a simple process, but it’s a vital yet complex part of each shot. Slapping the trigger or using too much finger can push a bullet off its mark. Gently squeeze it with the pad of your fingertip and then hold it back once the firing pin falls. Keep your head down on the stock and your eyes looking through the scope. Then, says Fallon, watch the bullet hit the mark through the scope.

“That forces you to stay focused on the shot. Follow-through is a critical ingredient in good shooting,” he adds.

A good rest is also critical. Fallon asks his students to take a couple of off-hand shots during each course. It’s not necessarily an exercise in shooting skills. Instead, Fallon uses it as a demonstration of how difficult it is to hit a target without a solid rest.

“The less muzzle movement there is, the better you can shoot. It’s a pretty basic rule, but it’s something that a lot of shooters don’t follow,” he says.

He’s a big fan of stock-mounted bipods, which require a shooter to lie on the ground or rest the rifle across a sturdy rest. There is no better way to steady a rifle in the field. However, it’s not always pr 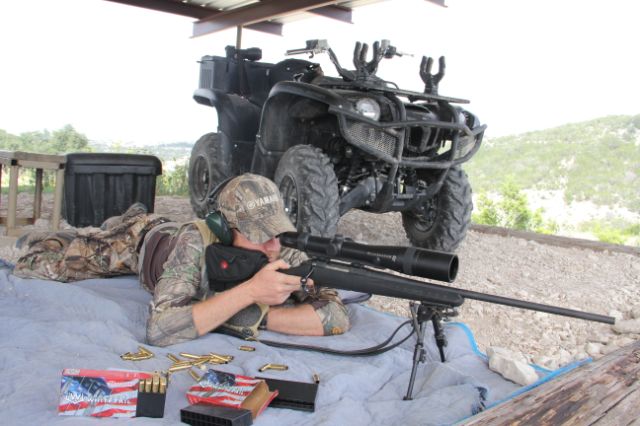 Practice makes perfect. Shoot as much and as often as you can, and then practice your mechanics by dry-firing.

actical to use a bipod in a hunting situation. Rest over a rock or in the fork of a tree. Use anything that helps stabilize the rifle as you aim.

Practice shooting from the fork or a tree or across your knees and practice it often. There’s no better way to hone your skills than by running a lot of ammo through your gun. Practice turns average shooters into good ones and good shooters into experts.

Ammunition is expensive, though, which is one reason Fallon is a big fan of dry-firing, which involves nothing more than going through all the motions except placing a live round in the chamber. It’s something anyone can do virtually anywhere. Just make sure your rifle is unloaded.

The Most Important Step

The real secret to putting a bullet in the bull’s-eye every time is simply knowing when to not pull the trigger, especially in a hunting situation. Spraying bullets all over a piece of paper is one thing. Making a bad shot at an animal? Inexcusable, says Fallon.

“You owe it to that animal to know your gun’s capability as well as your own,” he says. “If you aren’t absolutely positive you can make a good shot, don’t take it. Get closer, get a better rest, do whatever you have to do to, but don’t wound an animal.”

For more information on the SAAM course, visit www.ftwoutfitters.com.