One Rifle to Rule Them All: Best Caliber to Hunt Big Game in North America

One Rifle to Rule Them All: Best Cartridge to Hunt Big Game in North America

If you could use only one cartridge to hunt all of North America’s big game, what would it be? Perhaps the .300 Win Mag, the .308, 7mm Rem Mag? We asked the experts, and you may be surprised at their answer.

If things ever get too quiet around hunting camp, and you’re looking for an argument, start talking about guns. Specifically, talk about the one cartridge best suited for hunting all of North America’s big game species. For argument’s sake, we’re leaving Alaskan brown bears out of the equation. So, let’s do it. Let’s have a reasoned discussion that will make you sell all of your rifles except for that one. Just kidding. Hunter takes aim with his .270 in Montana’s backcountry.

All of the experts I spoke to listed a number of specific criteria they used to form their opinion. They listed bullet selection and versatility, ammo availability, recoil and performance. To keep this discussion from going too far into the weeds, I’m not even going to get into handloads. Let’s dive in.

There may be the perfect cartridge for each different big game species, but if you’re looking to buy just one rifle, you need it chambered in a cartridge that can take everything from coyotes to whitetails to elk to moose. That’s where the .308 comes in. You can buy factory loads in everything from 125-grain copper solids up to 180-grain bullets for the biggest game.

Wayne Van Zwoll is a long-time gun writer and expert marksman. He’s published 16 books and nearly 3,000 magazine articles on firearms, optics, ballistics and hunting. “Pinned to one cartridge, I might take the .308,” he says. Among a number of attributes, he also likes the mild recoil of the .308, “…its availability in more rifle types than any other centerfire cartridge, its reputation for accuracy in a variety of rifles, and the wide range of excellent .308 factory loads —including 178- to 180-grain bullets that excel on tough game in cover.”

He’s not joking about its versatility. A quick search on Midway USA’s website shows 168 different offerings of .308 ammo. That’s a lot of bullets—some are even in stock.

I don’t have to tell you that finding a box of ammo (any ammo) the past couple of years has been a nightmare. That’s slowly changing, but I did learn something. One, you can never have enough ammo. And two, newer, “boutique” cartridges are not ideal for a non-factory loader—like myself. You could talk ballistics for days, but if you don’t have any ammo to go hunting, then talking is all you’re going to do.

So, what’s a great all-around caliber that you might be able to pick up at an all-in-one gas station in the middle of nowhere Missouri? The .30-06 of course. The .30-06 has been around for more than a century. To prove its popularity, just check out the Boone and Crockett Records. Based on their data, the .30-06 has killed more record-book animals than any other single cartridge. See the runner-up in the sidebar.

Some hunters think they need to shoot the equivalent of a shoulder cannon to take down moose or elk. I’m talking to you .300 Remington Ultra Mag. The truth is, you don’t need a howitzer. Why? One, it’s not fun to shoot. And two, if it’s not fun to shoot, then chances are you’re not going to shoot it accurately. The key is finding a cartridge that you can shoot comfortably without flinching.

Art Wicks grew up in Upstate New York, and he’s been shooting since he was eight or nine. He’s now a retired Homeland Security special agent. He’s been a firearms instructor for U.S. Customs and a SWAT operator and instructor. Plus, there was that contractor gig in Afghanistan. You get the idea. The guy loves (and knows how) to shoot, and he loves to hunt with his boys in Montana. His darling cartridge is the .280 Ackley Improved. No, it’s not a house-hold name like the .30-06, but according to Art, “The .280 Ackley does the job with a lot less bang and recoil. With a 140-grain out of the .280, recoil is nothing. It’s going to shoot at 3200 fps and have the ballistics of a 7mm Rem Mag. It’s great for antelope, deer and elk—anything short of 500 yards.” Over 500? Just put a little heavier bullet in there he says. 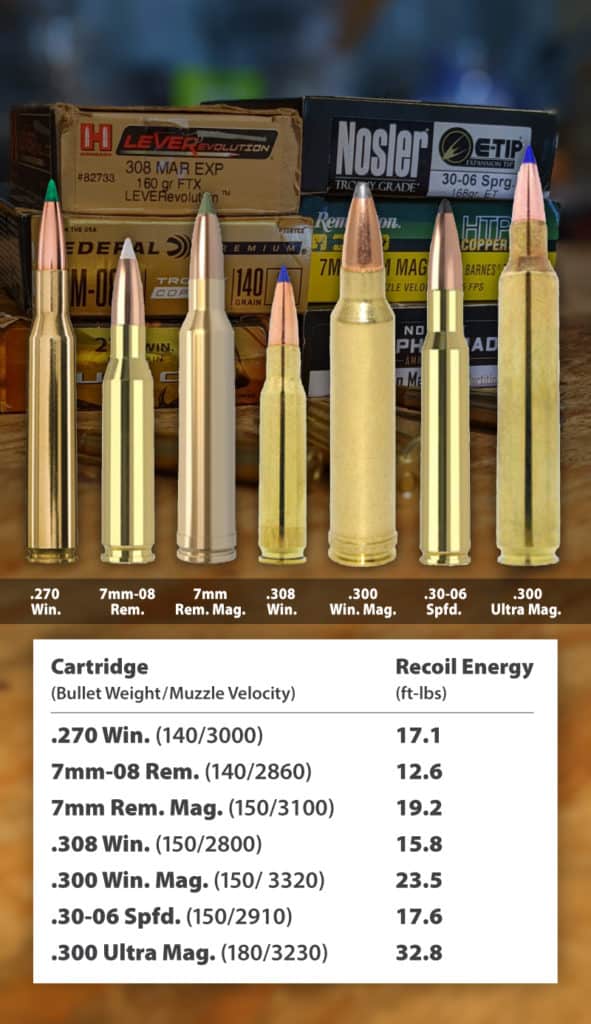 I intentionally avoided the ballistics rabbit hole to the very end, so I didn’t scare away readers. There are plenty of fine cartridges out there that overperform in the ballistics category, and there are even more articles and websites devoted to the topic. Let’s give Mr. Van Zwoll the last word on the subject. He needs a factory load of at least 140 grains that, at 400 yards, clocks 2,000 fps and packs 1,500 ft-lbs. For him, though, the 1,500 ft-lbs. is arbitrary because the vast majority of his shots are inside 200 yards. To keep things simple, I just refer to the ballistics table on the back of a box of ammo. Then I head to the range to ground truth the manufacturer’s stats with my rifle.

In the end, there really isn’t one ideal cartridge suited for every hunter. Yes, that’s a bit ambiguous. Fortunately, there are a number of cartridges worthy of hunting every species in North America. And if you happen to have a rifle chambered in one of them, then congratulations. You should never need to buy another rifle. That, though, is something worth arguing about.

What the Records Say

For nearly a century, the Boone and Crockett Club has been keeping records of the largest North American game taken by sportsmen. For more than a decade, the Club has also been keeping track of what those hunters are using to take all those record-book animals. Using what’s called their Method Visualizer, hunters can see what calibers are being used to kill various species. For instance, the number one caliber used to hunt whitetail deer? That is the .30-06. In fact, the .30-06 is the number one caliber used to take nearly 1,300 trophy-book entries. Coming in at a close second is the 7mm Rem Mag.

Is the.300 Win Mag the Best Cartridge Ever?